Eighteen in all led by Mayor Fujiwara Jun of Ninohe City, Iwate, came to New York and conducted “Ninohe City Fair in New York 2014” from October 3 (Friday) to October 6 (Monday) following from the previous year. This is the report about the Fair.

Ninohe City whose population is 30,000 is a producing area of Japanese lacquer and its production accounts for 80% of domestic production. Also, Joboji urushi is known as high-quality lacquer and has played a major role in the preservation of Japanese typical cultural buildings such as Kinkakuji in Kyoto, Konjikido of Chusonji, Nikko Toshogu, listed as world heritage.

This fair was featured food of Ninohe City such as rice and meat as well as “local sake (Nanbu Bijin)” and ”lacquerware (Joboji lacquerware),” which are two backbones of Ninohe brand. This fair consists of following five events.

Inviting the people as well as New York consulate general・ambassador Kusaga Sumio to the opening reception held at 6:00 pm on October 3 (Friday) in the restaurant, “EN Japanese Brasserie.”

“Nanbu Bijin” was served to attendees, and steak of “Iwate beef of short horns” that represents Ninohe City and creative and fancy dishes with” Nanbu crackers” were prepared at the reception.

The venue was warmed up by invited guests enjoying sake and dishes, listening to the description of Lacquerware.

Promotion menu each restaurant’s chef devised with Ninohe’s local products, such as rice, “Nanbu Bijin” and “Ninohe beef of short horns,” was served with real Joboji lacquerware in three restaurants in New York. At “Kyo Ya” known as one of the hardest restaurants to book, with only 12 kaiseki courses for the night (each $200 including sake and dishes, apart from tax and service charge) was served at the counter. In other two restaurants during the period, many customers ordered the special menu of Ninohe and the fair ended by a large success.

PR of Ninohe products was conducted in” Metropolitan Pavilion” using the booth of the restaurant show held by Mutual Trade from 10 to 17 on October 4 (Saturday). This restaurant show has been conducted 20 times so far, and it is on its 21st year. It has many booths of enterprises that sell Japanese food, materials, and kitchen equipment and is also crowded with the people involved in mainly the Northeastern area especially New York.

Tasting “Nanbu Bijin” with lacquer was tested at the bar counter in the venue and lecture, and the video presentation was given in the lounge area. It had been rare that local authorities have a booth alone. This way, a number of people involved in restaurants and invited guests visited the brand new and booth in Ninohe City.

Urushi seminar was held at 18 on October 6 (Monday) in Japan Society, and a presentation about the introduction of Japanese Urushi and its value was given. Many people who listened to the description of Urushi for the first time raised their hands in questions and answers session after the presentation, which showed their high interest in Urushi.

After that, lacquer coating and repairing with gold-dust lacquer was performed as well as the tasting of “Nanbu Bijin.” Odashima of Tekiseisha in Ninohe City who demonstrated lacquer coating was nervous surrounded by locals at first, but when asked many questions, he politely answered with a smile. Many people were touched by the performance, and it seems that they sensed good responses. Also, media from Japan was reporting focus on lacquer and lacquerware.

This was the first demonstration of making lacquerware in events and was quite effective since the value of lacquerware was able to be conveyed. 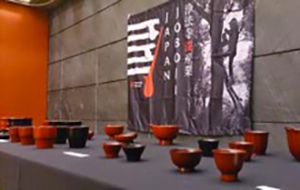 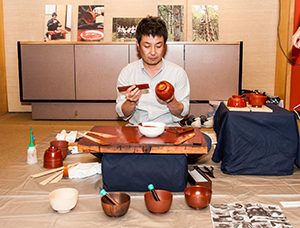 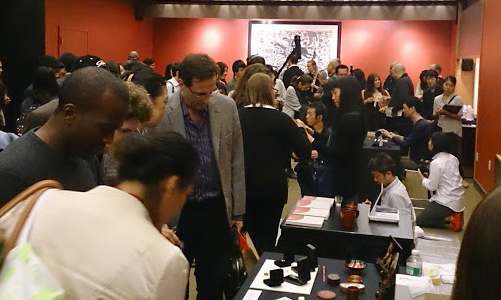 6. Big challenge of the small town, for the second time

While this project tied up with the administration and private enterprises started from last year to sell the “Ninohe brand” and promote the vitalization of the local industries. This year events were conducted more practically having their eyes glued towards the future. We were able to add fame to “Ninohe City” and “Joboji lacquerware” by making good use of the “Nanbu Bijin” that was already known in New York. However, each local government conducts events of sake and lacquerware, so we Ninohe City need to progress our promotion with new ideas as well as continuing these events. Also, regular activities are required to convey the charm of Ninohe City towards America.

The next year is the last of Ninohe City’s three-year project, and we would like to support it as much as possible, anticipating how it will improve this year and what effects it will have next year.

Go to next report