When you speak of Joboji Urushi, the Iwadate family cannot be missed. Mr. Seiji Iwadate, born in the Taisho period, is an Urushi tapper. His son Mr. Takashi Iwadate is a lacquer painter, the only traditional craftsman of Joboji urushi paint in the area. And his son, Takumi, is also a lacquer painter in training. Seiji has always led the industry of Joboji Urushi. In addition to launching various groups for the development of the industry such as Production Association of Joboji Urushi and Japan Lacquer-tapping Technology Preservation Society, he was flying around the country to sell lacquered products. Takashi was called back home when he was 22 to 23 by his active father, to enter the practice in lacquering. He is the key person regarding the revival of Joboji urushi paint in Joboji.

In the fruity scent of Urushi

The urushi tapped by Seiji used to be shipped to other production sites of lacquerware. This is because Joboji urushi paint was going out of business. However, the desire to process and ship the Joboji urushied products to market increased, instead of only sending them as raw material, they aimed to revive the industry utilizing the national project. Takashi studied at Industrial Technology Testing Institution (now called Iwate Industrial Technology Center) while working at the fresh markets in the morning. After that, he entered the workshop in Morioka city where they continued the Joboji urushi paint and trained for about 3 years in total.

As it was a supportive project and was only available for a period of time, he has become his own. However, as a lacquer painter, it is only the beginning. If he was uncertain about the process, he called the institution to check. While working as a lacquer painter, he also went out for sales. Mr. Shunichi Machida who enthusiastically trained him at the institution, as he was from Tokyo, also helped him in sales of products in the metropolitan area. “I just had to do it. I had no time to think about how hard it is. It’s just that people around me supported me so much.” Takashi recalls.

Debut of the Plain Lacquerware

The revived Joboji urushi paint was plain lacquerware. Urushilacquering exists as forestry. What we can do now is this, to make the best out of the material. That’s how it was created. And he aimed for the product to be solid. He tried another method to have a base layer of the paint, but the lacquer comes off easily. Since the domestic base powder (Jinoko) became difficult to source, he ended up with the method of re-coating Urushi only. Instead, he decided to use the Japanese cherry birch, which is even harder than the Japanese horse chestnut, as the wooden base. 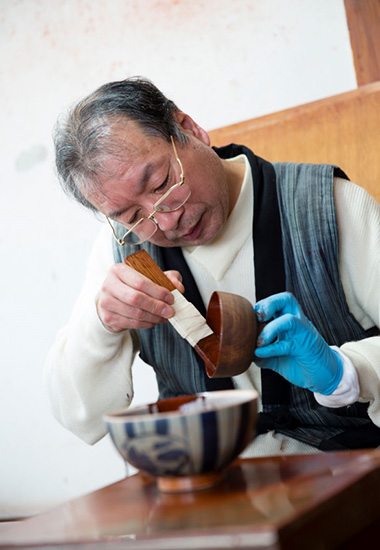 Takashi has been lacquering with no time to get lost or worry about, for more than 40 years of being a lacquer painter. In recent years, he also taps the lacquer and plants the trees. 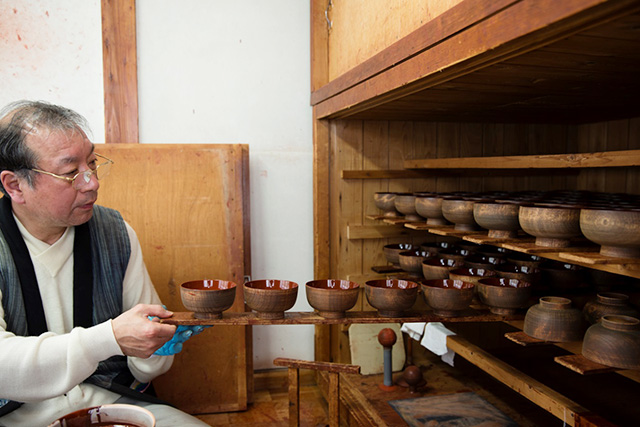 Lacquer does not dry unless there is humidity. It is not a drying process, but hardening. For this reason, we call the space to harden the Urushi “Urushi buro (Bath for Urushi).” Placing the products on the plate to take in and out of the bath.

Nonetheless, the mainstream of lacquerware 40 years ago was gorgeous and luxury. The stores selling local products in Iwate told him the solid colors would not sell. Yet, he insisted that “the products are for daily use,” and had them placed in shops in Tokyo. Takashi thinks this is dues to the already established reputation of Joboji, in the market of domestically produced lacquerware. Since then, its popularity has grown and become established. The bowl has been made in the same shape all time. There are requests from shops selling the products to change the design. Meanwhile, there is a surprised comment “it is unusual to have continued this far without changing the design.”

The bowl on the dining table is made by his father. The oldest son, Takumi says it was normal to have lacquerware, and he wasn’t particularly conscious of it, but “maybe I was glad.”

He was looking at his father whom various media comes for an interview, who is also well known and respected. The workshop was his playground. When he was in elementary school, he used to help with the wood hardening, the process of having Urushi absorbed into the wooden base to make some money. He always had a thought of succeeding his father’s work in the bottom of his heart. 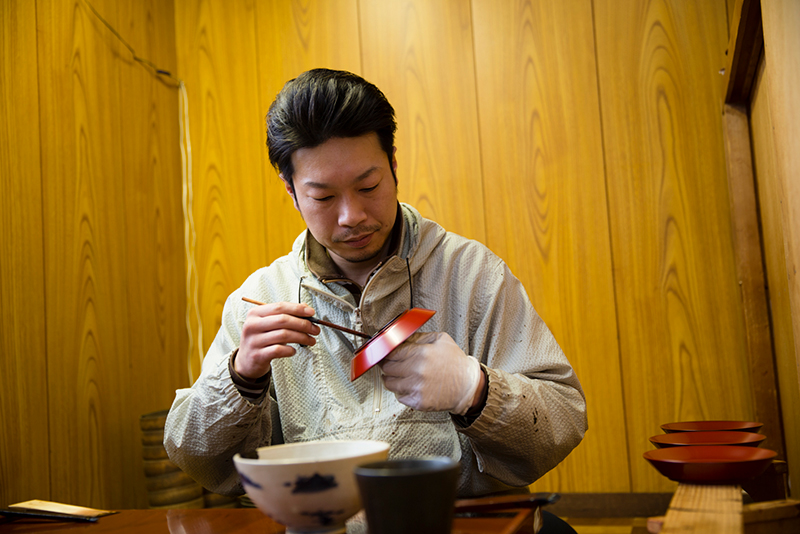 Takumi makes Joboji urushi paint while looking at his successful father. He sometimes also stands at the booth to sell the products at the fair.

“My father never told me to do this, but he asked, “Are you coming home yet?” I felt like I wanted to see the other parts of the world more, but I entered the industry at 21. But it was good I started early. This is an industry where I have to learn a lot.” Takumi has been training for 13 years now. Now he can be responsible for the finishing process. However, he says “My father is still far away.” He thinks about creating lacquerware under his name, but he is not sure if there is anything more than what his father has built. The further he goes in the industry, the more he feels how great his father is. He has been experiencing and failing, continuing to learn.

Takashi has always liked Urushi since he was little. “I thought Urushi had a good smell. I didn’t know that Urushi makes rashes”, and he has never been allergic to Urushi. So he had an advantage in his training to be a lacquer painter. If it was for ordinary people, they would have had rashes and had to take days off. But he says it’s a matter of the feeling. 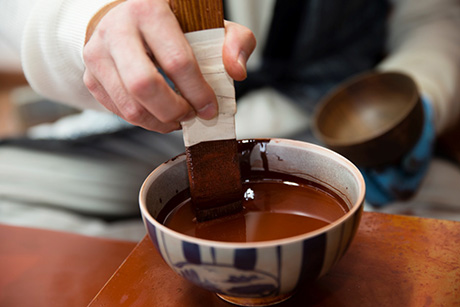 Japanese lacquer stretches well, so the longer the brush, the better. The brush is made of human hair. It is said that the best hair is taken from Ama (fishing diver).

“My father gave a writer from Tokyo to lick the sap of Urushi, saying “It’s sweet.” It didn’t do anything. Well if you have too much, your tongue will burn.” laughs Takashi. He has seen people licking Urushi at an exhibition of the lacquer. If you lick it, it tastes somewhat sweet. In Korea, it is said that some people drink Urushi with raw eggs. He showed us some random facts about Urushi as well. Although he doesn’t remember himself, Takumi had rashes all over his body when he was about 3 years old, and his great grandmother bit the wild sesame leaves to place them. However, it is interesting that Takumi’s daughter has no problem even if he touches her with his hands after the coating.

Since buying Urushi as a raw material is expensive, the master of lacquer painter Takashi recently goes to tap his own lacquer. He says “If you go tapping about once a week, (each season) you can get about a year worth of Urushi.” He says he was very impressed when he got his personal Urushi. He also has a bitter memory of having 100 of Urushi trees eaten by antelope, the year after he planted 500 trees.

The environment enables him to keep his Jobojii Urushi if he taps his own. “You can’t do this anywhere else. I learned by watching my father do it. It’s self-taught and actually not a good thing. Suzuki Ken-chan makes fun of me for that.” He laughs. Ken-chan is a nickname of Urushi-tapper and lacquer painter, Mr. Kenji Suzuki. He is a craftsman from outside the area. When Takashi started lacquering, the only lacquer painter in Joboji was Takashi. However, there is an increasing number of people in the Urushi industry in recent years.

Takashi says this is due to the establishment of “Tekiseisha,” operated by the city. “If I had been the only one continuing to work, it wouldn’t have been this way. As there is no such facility in the south of the prefecture (production site of Hidehira lacquering, Iwate), they say they are jealous of the north.” Tekiseisha is a store to sell lacquerware only using Joboji urushi, as well as the workshop. Takashi used to use Tekiseisha as his studio. The young generations gather to produce lacquerware, using a lot of Joboji Urushi until they can be independent. Iwadate laughs that, “They use more lacquer than national human treasures.” It is, in fact, a great environment for those who pursue to be a lacquer painter.

When we asked about the future of the Iwadate family, he answered “If my children want to do it, I want them to do. I hope that someday people interested in urushi lacquering will gather into this town and develop the Urushi culture of Joboji that will be passed on for decades.”

Joboji, where young people engaged in Urushi industry gather. They will keep on developing the culture of urushi lacquering as a community. And, this area itself will become the culture of Japan as the “Nation of Urushi.”