The birth of a craftsman who taps and paints

We tend to imagine a solitary craftsman or a writer when we hear phrases such as “Japanese culture” or “The future of lacquer made in Japan.” However, Mr. Suzuki is an ordinary person who lives on producing lacquer-ware very naturally. He is unique since he taps and paints for himself in the field of Japanese lacquer where specialization is taken for granted. He is also a young hope as a tapper in Joboji.

The mission of conveying what he succeeded to the next craftsman

He said clearly, “Though they say I am young, I’m already fifty.” Younger generations have started to tap in regional development aids. Also, those who were lacquer painters have started to tap themselves because they want to use domestically produced lacquer but it costs a lot. However, he is still young here in Joboji as an independent urushi tapper and craftsman. 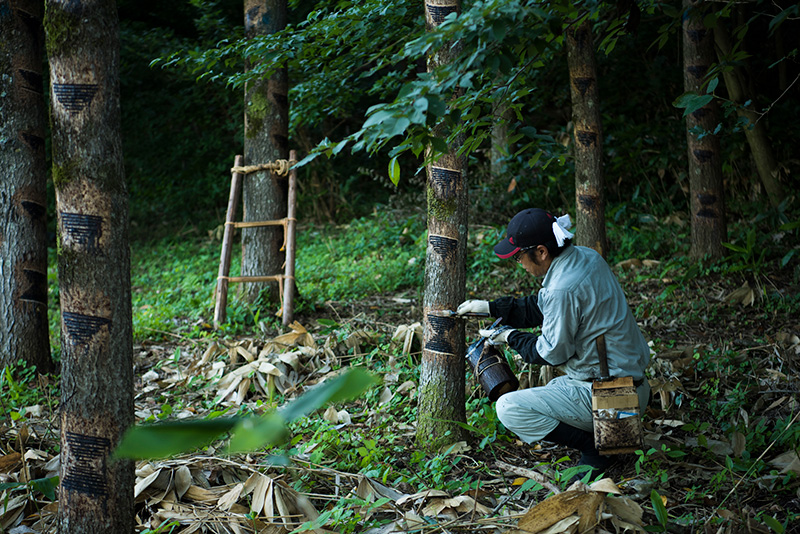 Lacquer taping by Suzuki was published as a booklet of Japan urushi tapping skill Preservation Society. Suzuki treasures care and skills of the teachers. Though he didn’t understand what he thought then, he says that he finally grasps, “This is it!”

He was interested in getting lacquer and wanted to study it thoroughly, so he came to Joboji to get practical training of Japan urushi tapping skill Preservation Society. After the training, he became a temporary worker of Tekiseisha that produces and sells Joboji urushi. He had a regular job as well as being a lacquer painter there and became independent. Now he is a person of Joboji. He is often sent out to publicize in seminars in the Metropolitan area. Still, he says, “They come to me because it’s easy to ask me. There are another greater craftsmen.”

A dilemma of a lacquer craftsman

“urushi tapping was worthwhile and a real pleasure since I could get more amounts of lacquer by tapping well, towards the beginning,” said Suzuki. That is to say, his true feelings are that he wants to coat more. Lacquer is an important source of income since it sells. The income is spent for unfinished wooden-ware for the next painting. But the term of producing is limited due to tapping. He is now so busy that he cannot produce almost anything but a bowl. He says, “I tap for more than half a year and do it by myself, so I have to keep customers waiting. The number of products I can make in a year is about 1,000, actually, about 500.”

Recently he has produced only three different sizes of bowls. There used to be two sizes, large and small, but as many inquiries were asking if there were bigger sizes, he added the larger one. He tells that it seems those who want the larger bowl are eager to place Zoni, soup with rice cake, into it. 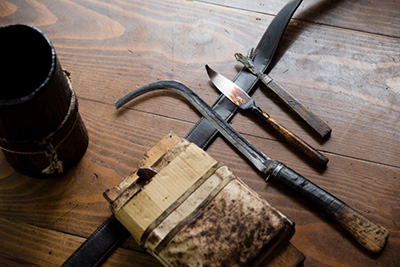 Basic tools of urushi tapping. From the right, a lacquer plane, a pallet and a sickle for peeling. Also a chainsaw and a helmet.。 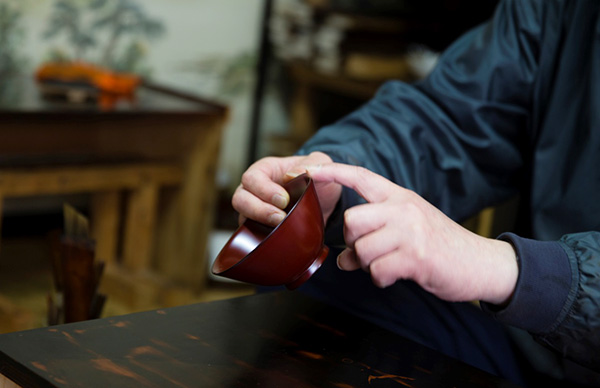 Unfinished wooden-ware is outsourced to the people living in other prefectures, who used to be trainees of urushi tapping. The mystery of shape and color. This is produced with the image of a bowl for rice.

The bowl made by Suzuki has a deep red color. He says, “I don’t know whether customers buy my products because they like Joboji urushi, but they say they like its color.” The red of Suzuki was created with the image of his favorite red wine. However, the lacquer colors change along with the different seasons or climates. They shine well or become blackish due to humidity, temperature. and climate. They change even with the same quantity of lacquer. They change in the way of drying. So it’s annoying.

He says with a smile, “I do this to make a living. I can’t change my job at this age. I just have to do it.” But he has something that he wants to produce. That is a square tray or a picnic box. He also wants to produce a transparent lacquer, which is suspended and grains of the wood can be seen.

The moment a lacquer is coated, it vividly shows the texture of the sap.

There is no good or bad lacquer

When he enters the mountains, he gives the ritual bows and claps, and prayer to not get hurt. He has been threatened by a bear and broken a hornet’s nest. Recently it’s been rare, but he encounters a pit viper or an antelope. Since he drives into the deep in the mountains, he is afraid of having an accident and is also careful when using a chainsaw to cut down the tree he has tapped. It seems that he has been protected by the god of the mountains.

He says, “When I came here 15 years ago, people thought it was inevitable that lacquer cannot be sold.” The elderly could live on their pension (without the income of lacquer), but the young could not make a living (without it). As I coated myself, I asked some people to use my lacquer since I had some connections with them. Independent creators have supported me for a long time.” He knows good lacquer to coat because he is a lacquer craftsman as well. That is his advantage.

He wants to pass down to the next generation

His master also recommended to me that he went to Joboji. His master, Taniguchi would come to see him every day from the first day when he started lacquer training in Joboji. He says, “He was worried about his unworthy pupil. At first, I was attracted to his humanity. His lacquer showed his humanity. He was stoic, facing lacquer seriously. And also facing customers.” He recalls his master. He respected his master’s figure of urushi tapping and his posture of creating as well. “My master was also taught by Mr. Sunamori in Ichinohe (in Iwate Prefecture), and he passed down his skills to me. Therefore I have a sense of mission that I will pass down to someone of the next generation. I don’t have anyone yet in mind.” He is fixing his eyes on the future.

When asked whether he would have his son to succeed him, he replied explicitly, “I will not.” However, after a while, he mentions his expectation for Japan, “But when Japan becomes a country with more respect for its tradition, I will think about it.” He does not talk about lacquer happily or try to make it look good. He is facing lacquer quite sincerely. If his son succeeds to his job twenty years later, it might be proof that Japan is a country that treasures its tradition and culture. 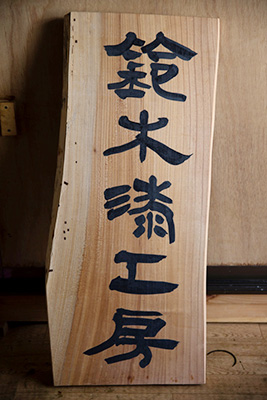 The studio sign was given to him when he became independent.