The only smithy where urushi tapping tools are made

Tago- cho in Aomori next to Ninohe City. The smithy manufacturing tools for urushi tapping lies in this town which is a famous place of production of garlic. Nakahata Fumitoshi is the only one in Japan that is making tools for urushi tapping. He succeeded the skills of making a lacquer plane, a sickle for peeling and pallet, from his father.
Nakahata is smithing with his wife. Now he has a pupil. When I opened the door with a rattling noise, his wife, Kazuko welcomed me, saying in a cheerful voice, “Come, come in.”

Without his tools some jobs cannot be done

Nakahata is always working at the place which is a hollow of about 30cm, which is slightly the right end of the workshop. There is a furnace in front of him. When he handles the bellows set on the left side of the furnace, a soft sound is continuously heard. The gentle sound of air spreads as if it were god’s breath.

“I wondered what was inside the bellows and once opened them when he was out. Yet, there was nothing in there. People of former days were great,” says Kazuko with a giggle. Then Nakahata slightly smiles, working. 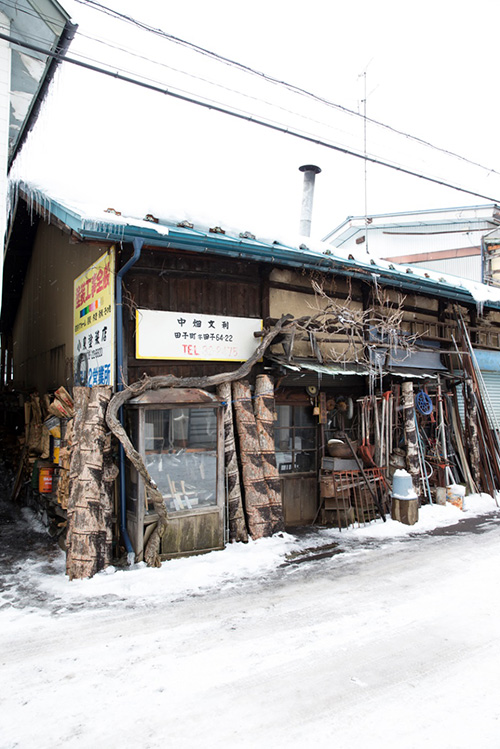 You can easily find his factory in the alley. It is surrounded by lacquer trees with scratch marks. The impressive building that is rich in the experience of life stands there as if the place were in a different dimension.

A high, sharp and delightful sound travels well, ding-dong-ding. Sparks with vigor approach closely. Nakahata presses the hot iron plate with fire tongs, and Kazuko strikes it with a hammer. At the special cue that only the couple knows, they start working and finish afterward. The fire tongs are put in the fire after striking repeatedly, and the plate is formed.

It is said that his mother also struck with a hammer. Kazuko was prepared to be a blacksmith’s wife, saying, “I used to work outside, but I thought I ought to learn it earlier anyways.” She began to work with a hammer the next year of their marriage. They have been working together for 40 years.

You can easily find his factory in the alley. It is surrounded by lacquer trees with scratch marks. The impressive building that is rich in the experience of life stands there as if the place were in a different dimension.

He had two masters; one was a urushi tapper and the other was his father

He says, “It was easy for me to start this work because the work had been already established. But my father must have had great difficulty.” It was in Joboji that his master, his father received his training. He was given the assignment to make “a tool of lacquer scratching” by his master when he became independent. It was thought that both the skills of scratching and tools of the Echizen area were better in those days. Nakahata thinks that his father’s master believed if his pupil could make it, he would be able to live happily. His father even tried to make tools for producing the scratch tool day after day. He completed the tool after 15 years of trial and error. Nakahata became his father’s pupil as soon as he graduated from school. 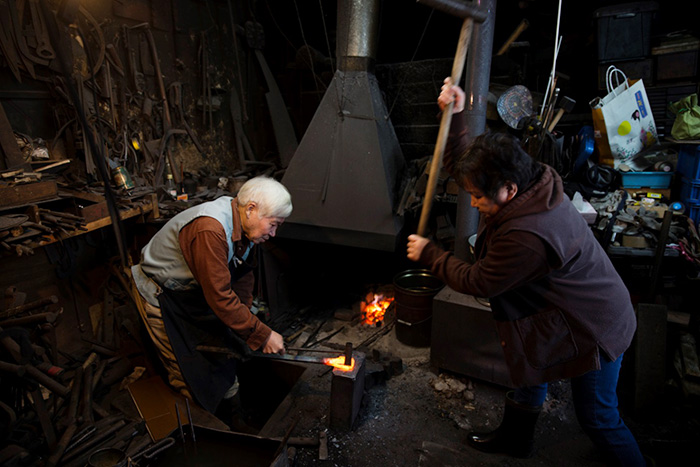 Helping each other, they produce a lacquer plane by hammering steel on iron. Anticipating each other’s movements is still work on progress.

The world of craftsman has the traditional method. The basis is to watch and learn. He recalls his early days of struggle, “I could make a form of a sort, but it was no good.” Thanks to the urushi tappers who criticized the tools he made, they were progressed for practical use. He says, “To put it in extreme terms, it seems that the urushi tappers who are particular about their tools and make various requests can tap good lacquer. The usage and taste differ according to the craftsman. Even the same craftsman makes different requests such as the width or angle of the rounded plane’s blade according to the condition of the trees he taps in that year. He responds to each urushi tapper’s fastidiousness. 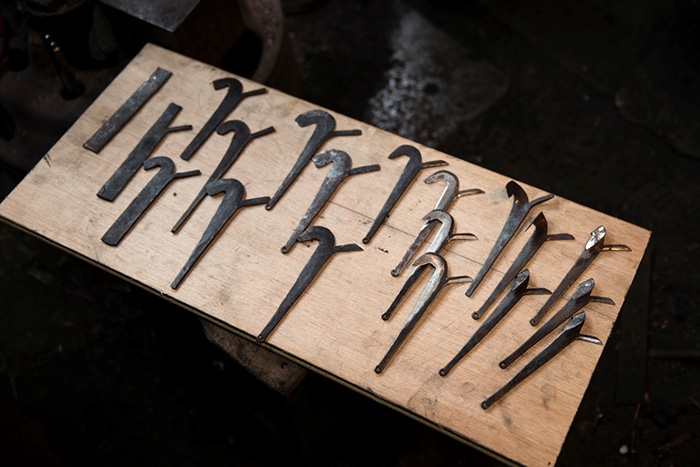 The number of the tool samples he put in a line is nineteen, and he says, “You will see my work roughly with them.” The first three tools look like a silhouette of a straight lacquer tree.

When he became confident in his own work, the smith who had worked in Echizen decided to give up his business. Then some orders from western Japan started to come to him. Not only tools of urushi tapping, but also various requests he had never accepted such as making tools of thatched roofs, restoring tools founded in ruins made their visit. He looks happy, saying with a laugh, “Some people came here because they were told that I was a strange blacksmith.” When he produces one-of -a kind tools, it sometimes results in a loss by the materials alone. Nevertheless, he wants to make the tool. The unusual blacksmith, who responds to requests to make tools without drawing or tools will not go into mass production and only challenges new tasks when asked.

Nakahata says, “There are certain works that will be impossible to continue without tools like lacquer work. So I’m making them so as to help such work to some extent. First, I make a tool its lowest level, setting aside whether it is good or not. And then, I improve and complete it.” Hundreds of tools did he produce like that. All the tools put on the wall except the saw were made by him without drawing. He says with a laugh, “So I don’t know how many tools I will make if asked.”

He has actively shown the information of making tools since he fell seriously ill. When asked by a blacksmith living far away, he teaches to him without hesitation. He uses the samples to show the process in that case. Each process is put in a line from the beginning to the complete tool like a process of biological evolution. I ask him what “process is the hardest?” He passes the same question to his pupil. Nioka Kyoji who became his pupil in 2015 as a supporter of community’s revitalization answers, “After all, the adjustment of the bending part is the hardest.” The master replies, “Still Nioka, though bending is annoying, the result has already been determined the step before bending. If you do well in the previous process, the next one will be easier. While doing carelessly makes the following processes very troublesome. You may think you can do it, but it is nothing but form.” 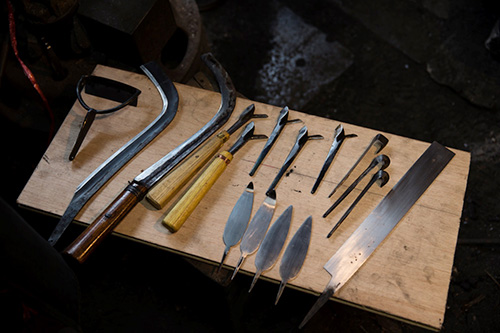 Tools of urushi tapping put in the factory. Lacquer planes are consumables unlike pallets and sickles, and they are purchased every year.

He experienced the same course so far. He says, “Any work is all the same.” You should be patient and face the work seriously. Detailed requests, sudden order, and connection through hobbies… He tells his pupil that anything will be useful to you some day. Niioka responds to what he says with a gentle smile. I cannot help hoping he will succeed his master’s spirit. Nakahata teaches us with his experience that succeeding to their cultures, such as urushi tapping and making tools, really means bringing up the persons to it pass down to.