To Overcome My Yesterday Self

Father’s Work that Stays in Mind

“Great working with you.” Every time he starts tapping the lacquer, Mr. Sunakoda gently talks to the tree. There is no particular rituals or anything, but he works with Urushi with the feeling of “Great work” and “Thank you.”
Born in a family that his great grandfather already happened to be a lacquer-tapper, it was natural that he helped his father Susumu to take care of the tools, or carry the cut trees. Not that he was interested in Urushi, only that he was a good boy who listens to his parents.

Taking the lacquer as his life mission

Although he was a son of the urushi tapper, he received training in Japanese urushi tapping Preservation Society to learn the whole thing. Each urushi tapper has different techniques and methods. They arrange their method to their own after learning from their masters. Mr. Sunakoda says there is nothing complicated about the techniques in lacquer-tapping. But he says, “This is the very basic, but trees are living material, you have to be nice to them, gently take care of them. And if you get lacquer, you scrape them nicely as well.”

When we asked what kind of urushi tapper taught him, “My trainer was my father….” he smiled. However, when he got into urushi tapping was after his father passed away in 2012. He was the craftsman of the same field and trained his son once, but he was never the rival or the master. He was gone before that happened. He was never given every possible help, but he remembered looking at his father, and how fast his hands moved is stuck in his mind. “Now I can’t do it as he did,” he says, but the scratches he makes are long like his father’s. The longer the scratch, the more you can get, but also the greater workload. “If you get a lot, it’s a lot of work. Takes time as well. But have to do it when you can.” His method is still under repetitive trial and error up to now.

It’s hard but not painful

I actually wanted to do this…” recalls Mr. Sunakoda. As there was a period when Urushilacquered products did not sell well, it was hard to concentrate just on the lacquer of his father’s generation. However, his father passed away, and his mother and wife were also not doing well physically, making it difficult to continue farming like before. This became the turning point. He thought about what he could do by himself, and there was Urushi.

”There were times my father told me that he didn’t want me to be a urushi tapper. The reason? It’s tough work.” The job he was involved in, but not recommended his son to do. What this means can be easily imagined by what Mr. Sunakoda’s father was told by his father, “Becoming a urushi tapper is like going to war.” Still, when we asked Mr. Sunakoda how tough his job is, he thought about it for a second and said, “I do it with my own allowance, so I wouldn’t phrase it tough.”

And he continued, “I have a goal.” “One is me getting the most lacquer, and another one was me yesterday.” To come over who he was yesterday, he records the volume he got that day, the weather and temperature in his journal. This is valuable data that only urushi tapper can make.

What surprised us is that he sets the goal to “take as much as possible.” His expression limited. “My field is to take the lacquer. I don’t know what lacquer is good.” This may lead to some misunderstanding, but he is almost saying he doesn’t know anything aside from the tapping. The fact that there are people who buy the lacquer he tapped. This is the value of Mr. Sunakoda and his lacquer. “I do what I have to do,” that is all.

Another surprise was his tools. “My father used to sharpen the sickle every day, but he didn’t sharpen the lacquer plane that scratches Urushi, not like others.” Mr. Sunakoda succeeds the same method. He made fun of himself and laughed, “When I use a polished plane, it cuts so well,” but actually if you don’t sharpen it, the blade will last longer, and he never really had trouble with cutting. He also says “I try to fit myself to the tools, so I don’t really have a favorite tool in particular.” The image of a craftsman completely overturned. 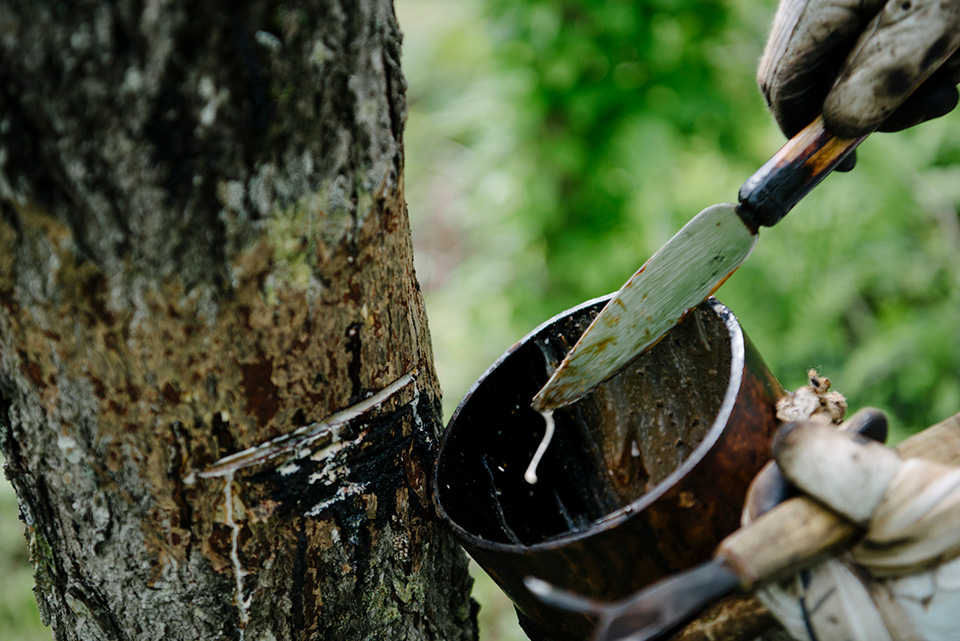 It is said that the lacquer that can be taken from an Urushi tree is about milk bottle (200ml). Scraping a wall water with a spatula is some overwhelming load of work. 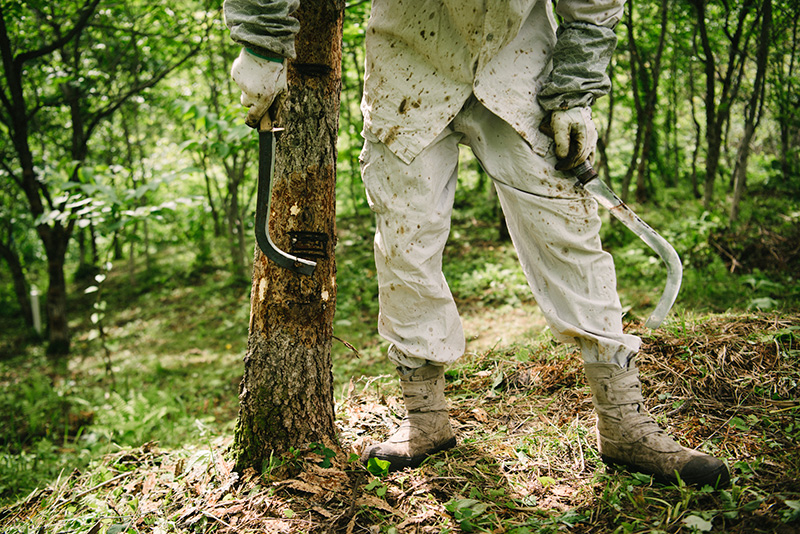 Before work begins, the area around the Urushi tree has to be cut down clean. The surface of the trunk is made flat with the bark sink to start tapping. 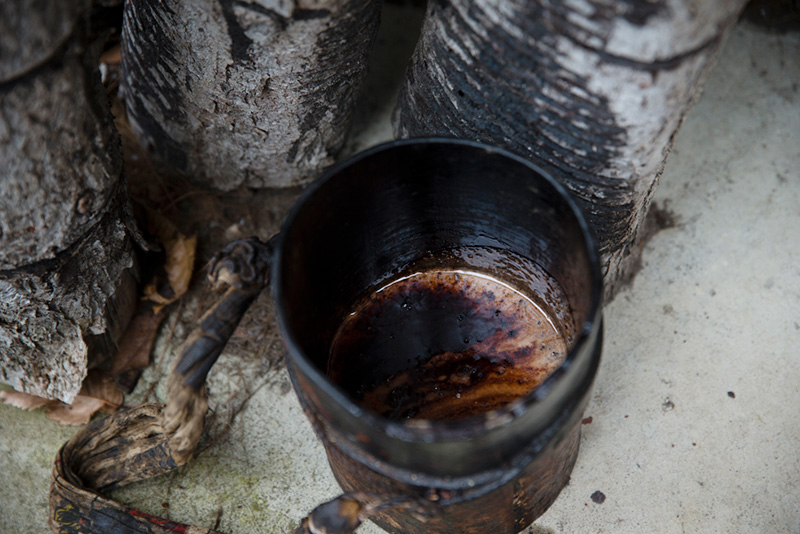 The urushi tapper himself makes Takappo. Magnolia and Linden barks are used. As the lacquer will be on the handle as well, it will be dyed black.

The goal is to be ”a urushi tapper until death.”

Although there was a change of form, he also continues farming. In general, urushi tapping is done from June to about November, Mr. Sunakoda does farming in between, and goes back to urushi tapping until the season ends. He also taps at home, bringing the branches back. This “branch-tapping” is not very efficient, so no one does this work.

He does so much of these because he is worried. Currently, the orders for Joboji urushi has increased drastically, and production cannot catch up. Many Urushi trees are planted, but it will take at least 15 years before Urushi can be taken. In the past, Chinese-made lacquer was dominant in the restoration of cultural assets but now replaced by domestic lacquer. With Joboji authentication system, he was nominated and established the position as Joboji brand. However, he is worried that they may go back to using imported lacquer if the production delay continues.

The lacquer taken from a branch is very little. Still, if you have a number of people doing it, you can still get some volume. He hopes to have other people to support by doing it himself.

His goal is to be the urushi tapper until his death. There were many urushi tappers in their mid-80s. He wonders if he can continue until then. His father went off a little earlier at 78, but he still respects and admires his craftsmanship. Keeping his father’s words “Do it fast, and carefully” in mind, Mr. Sunakoda works with Urushi simply, and sincerely. 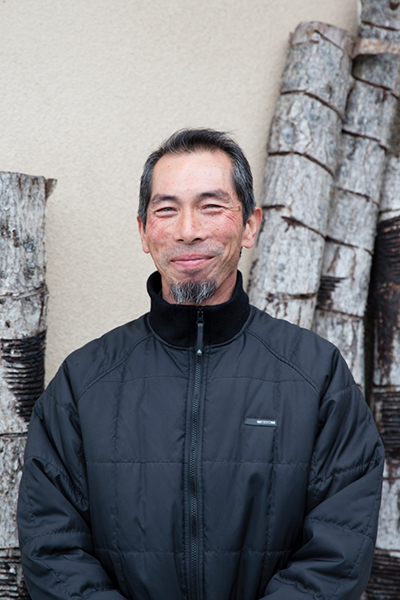 Mr. Sunakoda has had his beard long enough, so it is now his trademark. At the Joboji Urushi Competition in 2016, he was awarded the silver prize for the Sakarihen (late July to late August) lacquer, and bronze for Suehen (early to late September) lacquer.