Ninohe area had Urushi from ancient times. The area has been engaged in Urushi for a long time, as lacquer coated stone swords and Doki pottery from Jomon historical sites had been found. It is said that the production of lacquerware which leads to the current Joboji urushi has begun in the Heian era. Nambu foil bowl that was treasured by the Nambu clan was also made then. And now, growing, tapping, and painting Urushi…the life cycle of Urushi and Joboji are closely related. 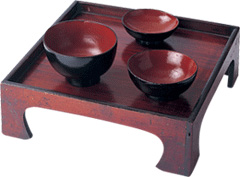 From the Jomon site of Joboji, a stone sword with red Urushi decoration was found. This is the first Urushi-lacquered product. Not much has been clarified, but it suggests that Urushi had been there since long ago. “Joboji urushi” is the next time Urushi appears in history. Its origin dates back to the Heian era. The monks of the old temple, Tendai-ji, which the locals call “Oyama,” making tableware for their own use for everyday meals and is said to be the origin of this. The tableware is with almost no decoration, simple and practical tool for everyday use. It seems that the characteristics of Joboji urushi that is passed onto the present day nurtured by the lives of the temple, pursuing humbleness and modest lifestyles. The name of the lacquerware “Oyama Goki,” used in the old age, indicating a rice bowl, soup bowl, and plate, still remains locally, which reminds us of the close relationship with Tendaiji temple. Later on, the tableware has been distributed to those who visited the temple, and the technique of the lacquering also spread among the common folk.

Originally, Joboji and the area around the temple were surrounded by Urushi trees, and it is not difficult to imagine this geological property contributed in the development of Joboji urushi. During the feudal government period, Urushi was a valuable product of the Morioka clan, and the record shows approximately 47% of these products are from Ninohe area, including Joboji.

In the Meiji era, craftsmen from Imadate area of Fukui, where many Urushi tappers were from long ago, have moved to Iwate. These migrants called “Echizen people” contributed in spreading the tapping technique called “Koroshi Gaki (the tree will be cut in that year),” which enables more sap to be tapped. Opposed to the conventional method “Yojo Gaki” (the tree will be kept long while only the sap and fruits are taken), as well as bringing tools of Urushi tapping into Iwate. Along with the increase in the volume of production of Urushi, the demand of “lacquerware for common people” has increased during the Taisho and Showa period, and the distribution channel expanded to foreign countries.

When the time had passed, around the period of the World War II. The Urushi had become the controlled item of the country, and all of these products had been required to present it to the country. In addition, when times were difficult where the material was short and limited domestically so Urushi was traded for a high price. As a matter of fact, the war has brought a prosperous time to Joboji urushi.

However, with the post-war change of times and lifestyle, and the increase of the imported and lower priced Urushi causes Joboji urushi to go into difficult time.

In that situation, Joboji urushi paint using its local Urushi has been revived locally. As a base of the work, the palace of the Joboji Urushi art of Ninohe City, “Tekiseisha” had opened in 1995. Since then, it focuses on the production and sales of the lacquerware made with all domestic materials, layering the Joboji urushi on top of the domestic wooden base, and it sells works of artists using Joboji urushi as well.

The local tradition to future generations, Urushi culture of Japan to the World. Based on Tekiseisha, the entire local community actively continues to let the world know about the “World of Joboji Urushi.”

How Urushi tree is tapped

How Urushi is painted

Tradition passed on by Urushi tappers 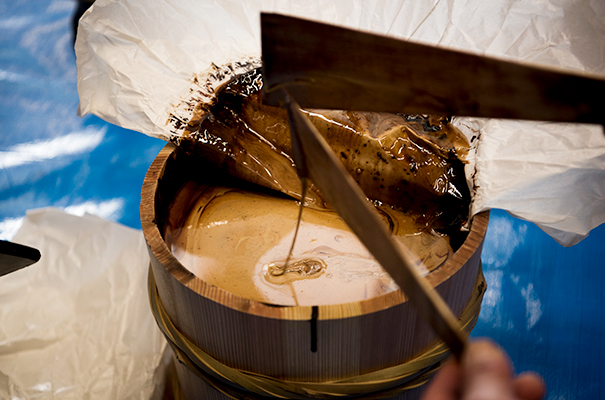 More than 97% of the Urushi in the market of the country is imported, only 3% is produced domestically. Out of this, approximately 70% is Joboji Urushi, mainly produced in Ninohe area.

Although domestic lacquer has drastically decreased with the change of era and increased volume of imported lacquer, the quality of it has been re-evaluated as it was used for repairing of National Treasure buildings that represent Japan such as; the Chusonji temple, Konjiki-do, Hiraizumi, Kinkaku of Rokuonji Temple, and the World Heritage Nisha Ichiji of Nikko. The Agency for Cultural Affairs has notified their policy of using domestically produced Urushi for the restoration of buildings such as national treasures from the year of 2018. The expansion of demand for domestic Urushi, as well as training of human resources engaged in production, are being promoted as a whole nation.

Ninohe City is also committed to passing the technology of the traditional and local Urushi tapping over and the education of Urushi tappers for the next generation, inviting trainees from all over the country. At the same time, the activities of growing trees of Urushi to protect the forest of Urushi spreads, such as public and private sectors cooperating in planting trees of Urushi. 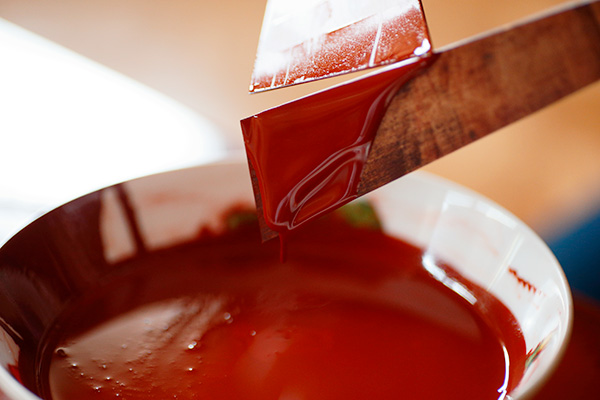 The characteristics of lacquerware such as soft texture, the warmth of the wood that fits well in hands, and the resistance in transferring heat, make it easy to handle when it contains something hot inside. Simple and robust “Containers of Life,” Joboji urushi paint increases its glow as you use, and makes lacquerware that can be used beyond generations with repair and repainting. Lacquerware is now increasingly appreciated as products to fit the modern lifestyle which aims for a sustainable society. Although Joboji urushi paint was born in Ninohe area, it is now also made in places like Morioka City.

Joboji urushi paint which grows a Urushi tree in the community, taps the lacquer, and made with a domestically grown wooden base with Joboji Urushi layered over and over, is an “Ultimate lacquerware.” In 2013, Ninohe City led to start the “Distributing Ninohe Brand Overseas” project, which distributes charms of Urushi internationally, including New York. In addition, the city conducts “Urushi Introduction Project,” to lend out bowls and spoons made with Joboji urushi paint to children in the town for free. The experiences of being exposed to lacquerware from a young age are expected to deepen the understanding of the traditional crafts in the area, as well as to keep the tradition for the next generation.